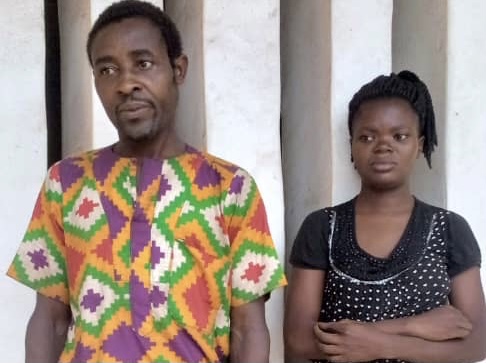 Operatives of the Ogun State Police Command have arrested one Mr Eze Onyebuchi and his wife Oluchi, for selling their one-month-old baby for N50,000.

They were arrested at Ilara in Ode Remo area of the state on the 16th of December, following a tip-off that the couple residing at Ayegbami area of the town willingly sold the baby to a woman now at large.
The Divisional Police Officer of Ode-Remo Division, DSP Olayemi Fagbohun, acted swiftly on the information and detailed his detectives to the area which led to the arrest of the couple.

The couple, upon interrogation, claimed that a woman by the name Mrs Ruth Obajinmi introduced them to a woman who claimed to have come from the Human Rights Office with a promise to foster the child.

They claimed that the said woman gave them a token sum of N50,000 and took the child away, without knowing her from nowhere. While the Police had assured that effort are on to arrest that woman in order to recover the child from her.

The State Police Commissioner, CP Lanre Bankole, has directed that the suspects be transferred to the state anti- human trafficking and child labour unit of the state investigation department for further investigation.

The CP said manhunt has been launched to arrest the buyer.We Have Not Had Water Supply In Months ― Abeokuta Residents

In spite of the huge investment in the water sector by the government and international organisations, water scarcity has grown to become a perennial nightmare for residents of Abeokuta, the Ogun State capital. This report x-rays the lives and experiences of residents in getting clean, potable and affordable water amidst the surge of COVID-19 cases in the state…

The Lagos-Ibadan railway was inaugurated recently for a full paid operation by the Nigerian Railway Corporation after about a year of free test-run. Our reporter joined the train to and fro Lagos from Ibadan and tells his experience in this report.…
https://tribuneonlineng.com/couple-sells-one-month-old-baby-for-n50000-in-ogun/

Something Has Gone Wrong With Our Son’, Says Father Of 19-year-old Boy Who Tried To Assassinate The Queen